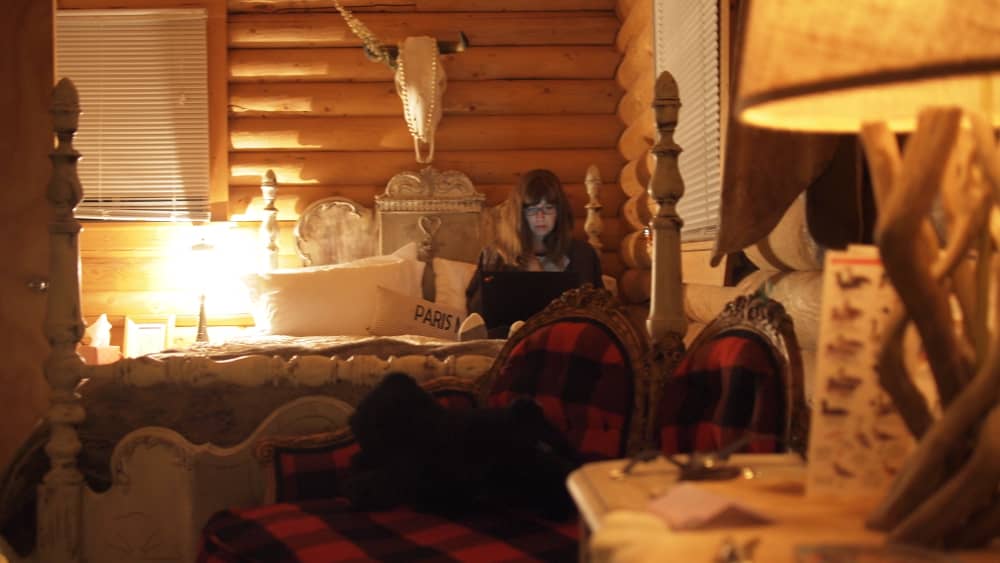 Here’s the decision I’ve made:

If this Oregon thing doesn’t work out, I’m headed to Montana. Jason can come if he wants.

I love this place.

We arrived Friday night after a later start than we wanted. We had a 7+ hour drive to our stop in Montana. We’d go through some bad rain storms to get here, and it was still raining steadily at 10pm as we searched to find our way in the dark to the cabin I’d booked for us in Roberts. Roberts sits just outside the only slightly larger town of Red Lodge, and it’s the kind of town that has one little tavern and one little breakfast spot – and no street lights. It’s also the kind of town that poses problems for GPS. After we’d missed our turn a couple times, I gave up and called the cabin owner (who lives in a cabin of her own close by) and she happily guided us in. We were tired and a little cranky. But when we pulled up in the gravel driveway, it warmed my heart to see the sillouhette of a woman standing on her front porch with her arms stretched wide, welcoming us to Montana. We fell into bed that night listening to rain falling on the leaves of the trees around the cabin. It was a chilly night – cooler than they’ve had so far this season – and Heidi, the owner, had turned on the heat for us. We slept hard and woke the next morning to the same sounds of light rain. It was to be a wet couple of days for our visit, but cooler weather that would be a welcomed change.

That morning we drove about 13 miles into Red Lodge, which sits at the bottom of Beartooth Pass – on the other side of the pass is Wyoming and Yellowstone.  Breakfast was biscuits with sausage gravy for him and a corn cake with maple syrup for me at the Regis Café, a local favorite.

We then took a walk through town and got in some shopping. As it turns out, Heidi owns a store called Paris Montana on Main Street, where she sells her jewelry creations. I spent some money in this little store.  And a few others.

We then got in the car and headed up the mountain. Beartooth Highway is considered one of the most scenic drives in the US according to Travel + Leisure and such. The drive is full of switchbacks and overlooks. We had a cloudy day, but we did manage to get some ok shots.

The very top is about a 5,000+ climb in altitude to just under 11,000 feet. The temperature difference is about 20 degrees, and it was 37 up there and snowing. Trees have a hard time growing in this environment, but some hearty little wildflowers manage to survive. We grabbed our photos and quickly jumped back in the wagon to make our way back down the mountain and warmer climes.

That night, we ate an early dinner at a local steakhouse before heading back to the cabin for one more toasty night. The next morning, we grabbed breakfast in Roberts at a little café (where Jason was excited to find they had side pork) then headed northwest to Seeley Lake, Montana.

Seeley Lake is more of a little resort town that sits outside of Missoula.  The drive was amazing – mountains all around us the whole way, passing rivers and creeks and cattle grazing in expansive pastures. I imagine we could’ve made better time and gotten there a lot earlier if we hadn’t stopped so much to just sit and gaze.

Stopping to top off the tank on the way meant a run inside to scope out the jerky scene.

We got settled in our room at Double Arrow Lodge, and with a few hours of daylight to go, we set out into the woods again. I desperately wanted to see a grizzly. (I think Jason was a little concerned that we actually might.) At one point I thought I had actually seen one off in the woods, but it turned out to be a tree stump….that I got angry at.

Dinner was brisket from a little BBQ spot in town. We split a huckleberry milkshake with it. Huckleberries seem to be big here and with good reason. They’re tasty little guys. Especially in a milkshake. Or on a waffle.

With little daylight left, we headed back to the lodge. And took a good look around for the first time. We liked it instantly. It was built in 1929 and has a grand history.

It also has employees who have been there 25+ years like Diana, who does a little housekeeping, front desk, group rooms coordination, and reservations.  She gave us the low down on the prettiest route to Spokane, and we took it.  On the way, there were semi-promises of spottings of big horn sheep and lynx. I about broke my neck looking all around on the way, but found none.

So this was Montana, one of the great loves of my life to come…I can feel it.  In the meantime, we swanked it up at the Davenport Hotel in Spokane last night. We’re setting off for Ashford this morning, to live in the trees for a couple days. My next post will be from Eugene!